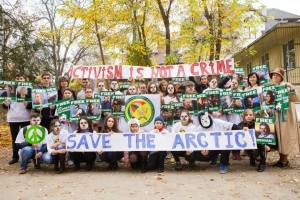 Gutta-Club members actively participate on the events organized by CDN from the moment of becoming a CDN Member Organization. In 2013 Gutta-Club was part of prep team of CDN Summer Camp in Croatia.

Gutta-Club is being a part of RUMB and Moldovan team of five members has been participating in the RUMB event in Kiev, Ukraine in November 2013. In 2014

Gutta has applied together with CDN for a Summer Camp to be held in Moldova and in 2015.

Gutta Club has been a Member Organization of CDN since February 2013.

Republican youth center Gutta-Club is a national socially useful independent non-profit non-governmental organization which is active for already 18 years. Gutta-Club’s aim is to educate active citizens of a new democratic society. The main priority is eco-education of the youth and facilitation in solving eco-problems.

Since 2002, Gutta-Club has become a national coordinator of SPARE (School Project for Application for Resources and Energy). The initiator and international coordinator of SPARE since 1996 is a Norwegian Society of Nature Conservation. SPARE is a chain of national ecological public organizations from 17 countries of Europe, Middle Asia and the Caucasus. SPARE’s aim is to provide school kids with education in the sphere of energy efficiency through cross-disciplinary education and practical activities. Today, more than 250 schools in Moldova are involved into SPARE.

Gutta-Club in cooperation with an energy provider Gas Natural Fenosa have organized a Republic fairy tales competition for children and young people called Save resources – Save the Planet. The winner was awarded with a trip to Spain. The best works were included into a bright Book of Fairy Tales colorfully illustrated by young artists.

In 2011 Gutta-Club won an educational component tender in the project Energy and Biomass funded by the EU and United Nations Development Programme (UNDP). It presupposes increasing the level of energy using in the Republic from renewable energy sources, in particular straw, to strengthen energy security in the country. As part of this component, there has been created a study book Renewable Energy Sources and a teacher’s guide that, as agreed by the Moldovan Ministry of Education, will be distributed to all the schools in the Republic. There has also been held a competition of works dedicated to energy conservation among school children of the 7th and 8th grades in 38 pilot schools of Moldova that are participants of the project. 76 winners were invited to take part in a summer eco-camp Energel led by the Gutta-Club members. Case studies on renewable energy sources constructing, a real research and practice conference, eco campaign for cleaning Ştefan Vodă, scientific experiments, excursions, role plays and competitions – these are just several of the activities performed for 10 days of the summer camp that made it unforgettable. 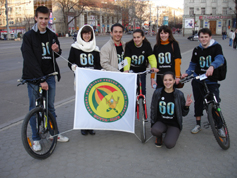 Global action called Earth Hour initiated by WWF Australia caught on in Gutta-Club in 2009 and now we organize numerous activities dedicated to Earth Hour that encourage people to switch off the light for one hour on the last Saturday of March and think how much energy and resources in the world are wasted and what every one of us can do to save our planet. Cycling groups, flashmobs, excursions, theme movies, Mass Media talks, school lessons on how to economize energy, asphalt drawings competitions, posters publishing, even cartoon drawing and distribution and many others are among the activities organized by Gutta-Club annually within the Earth Hour. All these activities help us to involve more and more supporters and partners.

The International project Green Caravan: Use Your Rights to Improve the Environment has become a mutual initiative of three public organizations: The Danish Society for Nature Conservation (Denmark), Next Stop – New Life (Belarus) and Gutta-Club (Moldova). The main purpose of the project was to raise awareness of the people of Moldova and Belarus of the Aarhus Convention that guarantees the countries that signed and ratified it that it will provide the people with the access to ecological information; involve the public into the decision-making process (including laws) in the field of environment; give the access to the legislation on ecological issues.

For example, Network of teachers environmentalists of Moldova. This is the name of a three-year programme implemented by Gutta-Club together with a Swedish organization called Keep Sweden Tidy under the support of SIDA. As a result, we now have reliable, enthusiastic teachers all over the Republic. Thanks to these people we can work with children and the youth much more efficiently.

A course on permacultural design has been realized by Gutta-Club together with the experts from the Permacultural Design Association, UK and Belarus association Ecodom. Permaculture is sustainable agriculture that does not harm the environment and requires minimum time and force but gives maximum effect. Moldova is a country whose main wealth is the land. 75% of the country’s territory is chernozem (black soil). Every citizen of Moldova is a farmer by birth. That is why it is so important to preserve and enrich what we are generously endowed with by nature. Chemical fertilizers, poisonous substances against animals harming crop plants, obligatory plowing, etc. are harmful for the soil that is why it’s necessary to leave all these things behind. Future belongs to permacultural design. And who else’s responsibility should it be to promote this new trend if not tomorrow’s land owners’?

We have also organized such actions as Children to Children and A Book for a Hospital which taught our kids to be kind and empathizing other people’s misfortune. Because your care for your Home and all its dwellers starts precisely with Love. To give a second life to the things that at first sight might seem to have served their time means to save resources and energy, both of people and nature.

There have also been eco campaigns Primula, Don’t Cut Christmas Trees, A Day without Cars, Let’s Clean the Planet from Garbage, 350, Our Longevity Tree, Say NO! to Atomic Power Stations, The Climate is Changing – What about You?. Eco-bag Today – Clean Planet Tomorrow! and many others.

There have also been published many useful and handy books such as Build a City! – education through a game; ABC of Success. How to organize actions and campaigns – a manual for activists of social movement; Energy and Me – a textbook on resource saving for elementary school; Three E: Economics, Energy and Energy conservation; Eco-education: methods and examples; The House that You’ll Build, and many others that we designed, wrote sometimes on our own and sometimes together with our friends and like-minded people.

But no matter how many things are behind us there’s yet more ahead of us! Ideas, plans, new goals and horizons. And the main award is success of those who took this road with us, first hesitatingly and timidly, then courageously and resolutely, doing good things and grand deeds.

has its logo in the shape of a smiling water drop under an umbrella. We used the umbrella as we are the umbrella organization. We include different children and youth groups located all over the Republic of Moldova. And the  drop is the Latin translation of the word Gutta. Our motto is Gutta cavat lapidem (Ovidius) which means little strokes fell great oaks. In other words, if every person in every small town does any small good deed, all together they will change the image of our planet to the better.