Dear Green friends – Organizations, Political Parties, Individual Activists and anyone else interested and worried what is going on in our world,

There are a lot of terrifying stuff happening in our countries and I would love to take 10 minutes from your busy schedule to share with you about several things taking place here, in Armenia.

Many, many things hap 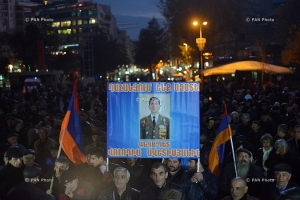 pened  here – from the fights between citizens and police, water cannons and illegal arrests to a constitutional changes which legalize gay marriage in Armenia. Though the last one seems exciting and very promising for Armenia, I would love to stick to this and open the dark sides of a constitutional changes, and what lays behind this.

Starting from 2013, when the Republican Party of Armenia and the head of the party Serj Sargsyan won the Armenian Presidential elections for the second time, things started to get worse than they were. From 12000 to 15000 people emigrating each month, money default, budget crisis, increased prices for electricity, gas and water, decrease of working places and salary and the raise of a poverty are just few things compared to a full list of a troubles “our” government made.

All this things that happened lead to series of demonstrations, with an aim to bring down the ongoing government and build a new one. Unfortunately, it was too late. 18000 policeman on a duty and an army covering the back of a president, with a corrupted oligarchical system was a huge barrier for us, people who live in Armenia, to do anything.  After dozens of failed revolutionary demonstrations and a lot of political arrests, people gave up. We silently agreed to wait till 2017 and kick out the present government in a “National Assembly” elections.

Understanding that they do not have any chances to win the other elections and are going to be kicked out from their positions, our government created “Constitutional Changes”. 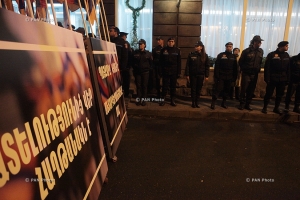 This is a government-proposed constitutional reform and referendum on which the vote is going to take place on 6th of December and on which I am asking you to pay your attention on. Through the proposed changes Armenia will turn into a Parliamentary Republic, which will be led by the Prime Minister, who will be elected by the political parties. You may think this is more democratic way than we currently have, but I need to make sure you don’t go that way because, again – we are talking about Armenia where every change (even the good one) has something bad attention covered under. This time it is the president of Armenia, Serj Sargsyan.

Republican Party of Armenia has the majority of seats in the parliament, and basically all other political parties are just a “branches” of them. The ones who were in opposition, are either destroyed, either are afraid to speak. Since 95% of the parties voted in a favor to convoke new elections, it is clearly visible that the heads of all this “parties” are just republicans working “undercover”. The head of a republican party is Serg Sargsyan, and as he said several times, he is not even thinking to drop off the position, and it is clearly visible to everyone living in Armenia, that if the referendum is passed, we are going to be back to our soviet roots. 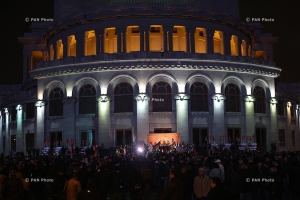 Being led by Serj Sargsyan, the republicans will just simply pass every kind of a law this person wants. This basically means that he will continue to be a president of RA to his death. Other marionette parties will just do whatever he wants them to do, and the democracy and even a small chance of it will be destroyed in Armenia.
Because it was clearly visible that this referendum will not bring anything positive in Armenia, and the EU will not be happy about this.

The Government of RA agreed with Venice Commission that through the new constitution the Government will permit the gay marriage in a territory of Armenia. Within this point added to a new constitution the government got the full support and money from European Union to promote the referendum. Unfortunately, we, as the people who live here, understand that the things written on the paper does not usually happen. We don’t believe that the current Government of RA who never showed a single support to LGBT+ community of Armenia will ever come to this. In the end nothing is going to change and this is just a trick from the government to get a full support of European Union on this legalization. This will stay on the paper for at least several decades.

The other frightening thing going on here these few days are the employers trying to affect the results of the voting. People are directed and pushed to collect the passports of their neighbors, friends and relatives and bring them to their working places, so the h 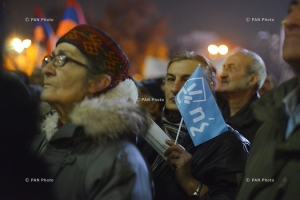 ead of a company can scan them and send to an appropriate persons which will vote instead of that people on the 6th of December. If one refuses to do so, is fired in just a few days. Dozens of workers refused to act in this manner and were fired in just a few days after the refusal. Many did as said with a fear of getting fired.

We strictly criticise the government of RA on what it does. All of the dirty, violent and illegal acts against the people who live in Armenia are opposing every kind of Human Right principle and policy. Armenian Government should stop the processes of electoral fraud and let the citizens decide for who to vote. All this things happening here are direct violations of a human rights, and we, the ones who are fighting against all of this things and reforms are doing our best to stop all of the above mentioned. Unfortunately, our power is not enough, and we strictly need to raise the awareness on what is going on in Armenia and your help is needed.

I am kindly asking you to share this within you networks, and be aware that a strong fight on the 7th of December is going to be held in Armenia.