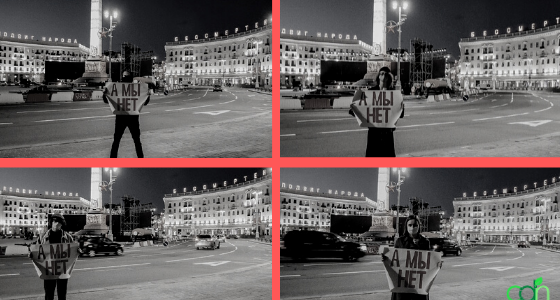 The previous weekend marked the 75th anniversary of Nazi Germany defeat in the World War II. In order to commemorate this day, majority of the countries held reduced and small ceremonies due to the cautious measures in halting the spread of the pandemic.

This was not the case for Belarus, where the Belarusian Armed Forces put on a gigantic parade, attracting thousands of attendees and veterans despite the high risk of coronavirus infection.

Only few activists voiced the concerns through actions regarding the critical situation in the country. Unfortunately, these actions were met with negative consequences. Majority of the activists were detained, among them Veranika Yanovich, an activist of the Belarusian Young Greens, and they were released only after a couple of hours. For more insights, you can read below the statement of Belarus Young Greens on the incident.

As you probably already know, in Belarus, despite the situation with the pandemic, the Victory Day parade for the 9th of May was not canceled. Thousands of people attended it, exposing themselves to the coronavirus pandemic, which can lead to terrible consequences.

A huge amount of money was invested on the parade, which could have been allocated to hospitals and all those medical workers who are now working without breaks.

Therefore on 8th of May, the youth initiative “Моладзевы блок” held two actions. One of them was held on Victory Square, where activists stood up in front of the buildings, where it is written “Подвиг народа бессмертен” (“Feat of the people is immortal”) with banners “А мы нет” (“But we are not”)

The second campaign spread across various Belarusian and foreign media channels. In it, activists, in parallel with the rehearsal of the parade, performed an action, while carrying a fake coffin. You can watch it HERE.

Many participants of these actions were detained, including Veranika Yanovich, an activist of the Belarusian Young Greens. Veranika has just been released along with some other activists. However, until the release time, nothing was known about her location.

We ask the international community to show support for Veranika and other activists in every possible way. We hope that this will make the situation better.