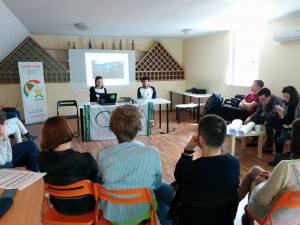 CDN’s 6th General Assembly took place in Chișinău, Moldova from 26th February to 1st March, 2015. We want to thank our Member Organisation Gutta Club which hosted this year’s General Assembly and did a great job at organising everything ranging from the venue to general accommodation. We also had the unique opportunity to participate in one of Gutta Club’s street actions which allowed the delegates to get an insight into the political work of the organization.

During the General Assembly the new Executive Committee has been elected. Yauhen Herasimenka (Belarus), Elisaveta Gutu (Moldova), Anastasija Pejovic (Serbia), Mariam Dzneladze (Georgia) and Max Weber (Germany) are looking forward to contributing to CDN’s work in their new role as Executive Committee members. The General Assembly was accompanied by a lot of interesting discussions and debates which lead to a number of amendments, attached below.
Sessions on the working environment in the Working Groups, Gender balance inside CDN Member Organizations and an exchange between Member Organizations have led to interesting discussions while sessions on fundraising, Urban Activism and gentrification have topped of the programme.


Below you can find the updated documents discussed during the General Assembly: