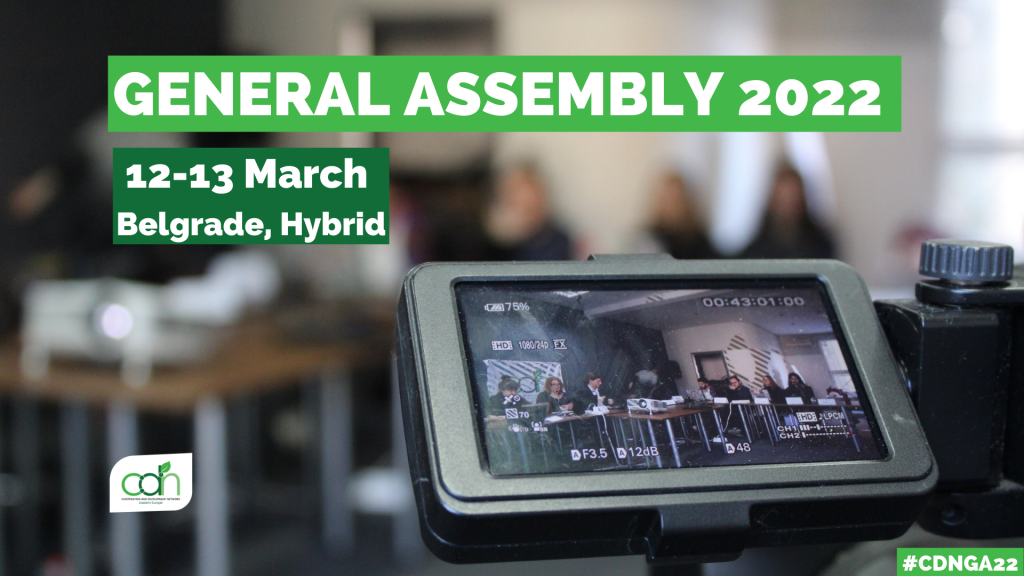 Cooperation and Development Network Eastern Europe held its 13th General Assembly in Belgrade, Serbia/Hybrid 12-13th of March 2022. The GA was planned to happen in live in Tbilisi, Georgia and practice democracy in physical space once again after long COVID-19 years. However, this was not possible anymore due to the Russian invasion and ongoing war in Ukraine. Taking into account instability in the whole region and consequent risks the Executive Committee had decided to move the event to an online/hybrid format.

The General Assembly once again, decided on the direction the Network should take over the next year by adopting the Activity and Financial Plan, electing the new EC and adding amendments to Internal Rules of Procedure, Political Platform and Strategy Statement 2022-24, Safe Space Policy as well as adopted four resolutions.

Apart from the statutory part, we organised a discussion regarding the current situation in Ukraine and listened to the presentation by Yevheniia Zasiadko, former Executive Committee Member of CDN from Ukraine, about dependence on fossil fuels from Russia and the importance of sanctions and embargo, as well as how can we support. Based on the input and discussion the resolution was developed by the Executive Committee, amendments made by the delegates and finally adopted by the General Assembly.

Moreover, we are happy to welcome Youth Forum URA as the newest Member Organisation as was approved by the General Assembly.

We want to say a big thank you to all delegates, candidates and guests who contributed to another amazing GA which we leave with big plans and EC motivated to pursue. We should also should express our gratitude to Young Greens of Georgia for fruitful cooperation and support in organising the GA as well as an understanding for the last-minute cancellation.

Here are the documents amendment and/or adopted by the General Assembly:

• Minutes of the 2021 General Assembly

• The Future of Work

• Geopolitics of Eastern Europe: In Solidarity with Ukraine and Against Russian Aggression

You can can find the Minutes of the 2022 General Assembly to be adopted by the next GA blow: