Green Academy 2016 with main topic – “Information War” was organized by Belarus Young Greens and Cooperation and Development Network Eastern Europe with the support of Green Forum Sweden during 15th – 17th January 2016 in Lviv, Ukraine. During 3 days 20 participants from Ukraine, Belarus, Moldova, Russia gathered to explore media and its influence on mass-consciousness. The program tackled mechanisms of propaganda, starting with historical perspective, its development, and emphasis on consequences and effects on people’s conscious (hate speech, empathy, polarization of society, marking people), finishing with present initiatives – what is currently being done and what are the possible ways to combat it.

Starting from what means information war, propaganda and critical thinking as terms on the first day, we’ve continued with countries overview and personal examples of how media influenced our own lives in the evening. 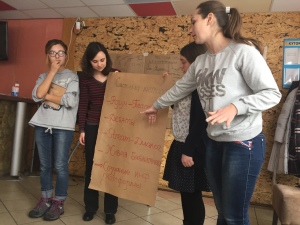 On the second day we started with historical perspective, giving examples of how radio influenced people during the world war, or which consequences the “1000 hills free radio” brought in Rwanda. From history, we’ve moved to our-days, to methods used in different media – from newspapers, radio to TV and new media. We had a few guests during the event, who spoke about Stream – as an option of spreading what’s really going on in the real time; theatre performances as a mean to raise awareness and understanding on the local level; psychological aspect of propaganda.

On the last day we had CDN (by Gutu Elisaveta, EC member) and FYEG (by Iryna Okseniuk, 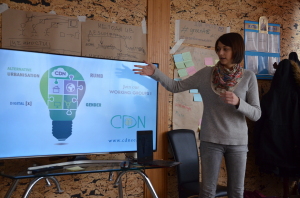 EC member) presentations, as one of the possible ways to get included in the green movement and continue working on the topic.  Participants were very enthusiastic about follow-up activities, proposing actions from personal and community awareness raising to trainings, theater performances and international campaigns within CDN RUMB working group and further. Participants also proposed to make a toolkit about media-literacy for general public and continue further with new events both on the local, regional and international level. Looking forward for the follow-up activities and let’s continue to explore topic further during the April “I know, therefore I act! Information War and Youth Participation” seminar.