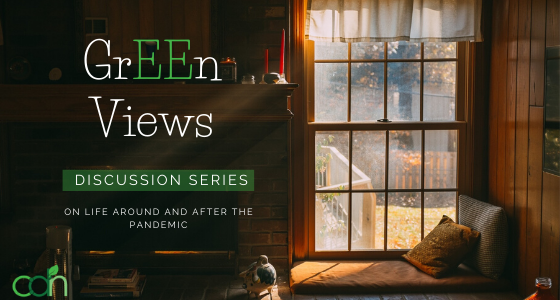 As the world as we know it changes in the light of COVID-19 pandemic, all the issues and injustices of the system we live in are becoming more obvious than ever. Governments of Eastern Europe (and not only) have been failing to meet their duties in these challenging times and in the past weeks we’ve been witnessing violation of basic freedoms and rights and misuse of political power being justified with the given situation. Social and economical inequalities are being more visible than ever while staying safe and with access to fulfilling basic needs becomes a privilege.

CDN Executive Committee with the joint efforts of our Working Groups will be hosting series of online discussions in May and June with an aim of opening space for young Green activists from Eastern Europe and those who share our concerns in regards to how the pandemic affects different aspects of our lives. We will be talking about democracy being threatened, political narratives around and after the pandemic, digital and gender aspects of pandemic, privileges, inequalities and solidarity, as well as how can a crisis like this prepare us for our ongoing and future fight in regards to climate change.

Come and talk with us! Express your concerns, share your thoughts and discuss with us ideas for the post-pandemic world. The online discussions will take place on Tuesdays at 18:00 CEST on Jitsi Meet (more information on how to join will be published in the announcement of each discussion).

Join the first discussion on Tuesday, 5th of May at 18 CEST. We will reflect on threats to democracy and freedom of speech, media silencing, how the governments in the region are dealing with the current situation and what is the role of the civil society in these turbulent times. If you need a space for a rant, a bit of solidarity from your peers but you also want to use the quarantine days for plotting the strategies for the future fights: well, this must be the place!

In the second discussion on Tuesday 12th of May we will be talking about solidarity actions counteracting hunger, alternatives to mass production and local solutions that won’t endanger our environment and people.

We will reflect on food accesibililty in times of pandemic, EE dependence on importing goods and with that, importance of local production. How we can break free of the shackles of intensified agriculture once and for all?

In the third discussion on Tuesday 19th of May we will be talking on Climate Justice Fight in the Post-Pandemic World.

While on one hand Covid-19 pandemic puts climate fight in the shadow for a while and strikes move to the digital space, on the other, the bigger question of how can we use one crisis to fight the other rises. In Eastern Europe where the Climate Movement is in general weaker comparing to the rest of Europe, advocating for climate justice seemingly will get even harder in the aftermath of the pandemic.

But at the same time, we’ve been talking about nature in the cities revitalizing during the lockdown, advantages of using the bike during the pandemic, need for supporting local farmers in these hard times… Could the social and economical measures we are advocating for healing the post-pandemic world be the same ones that support our fight for Climate Justice?

In the fourth webinar organised on Tuesday 26th of May by the Prep-team of Outsmarting the Paradigm seminar that CDN organises in cooperation with GEF – Green European Foundation, we’re exploring how implementation of technology in cities shapes our economy.

To explore various aspects of these interactions, we’ll be joined by Kim van Sparrentak, MEP for the Greens/EFA group, and Lisa Gutu, Head of Business at Salt Edge and a former CDN Executive committee member.

Post-pandemic scenarios all lead to a reshaped economy. In the 5th discussion on Tuesday 2nd June we will discuss on how this new posture of economy is being formed in Eastern Europe countries in terms of an attacked financial and market system.

Let’s try to build a scene of the survival economic reality. A view of what is the situation of the macroeconomic chain starting from basic income, employment, financial equality, national product, businesses, capitalism, austerity measures; all this will be a leading chain to recession finding its road of recovering.

Our role in this scene: how can we fight harsh austerity measures and neo-liberal policy? We can built a real forecast of how Eastern Europe is weathering the storm. This will put a view on a very beautiful hope: the only way to recovery can be Green Economy.

In the 6th discussion on 9th June, the Gender Working Group of CDN and Delila Hasanbegović from Sarajevo Open Center will talk about how the ongoing COVID-19 pandemic has had a significant impact on the LGBT+ community and women. We will discuss on what struggles face the individuals from marginalised or disadvantaged groups in #EasternEurope  in terms of #gender, healthcare, economy and social situation. They say that “women and children are saved first”, but what we have seen in the times of pandemic is exactly the opposite.

Our guest, Delila Hasanbegović is an author of multiple published papers on topics of human rights, women and LBGT+, feminism as well as political participation of women. Currently she’s a lobbyist for adequate health access for trans and intersex people in Bosnia and Herzegovina, gender equality in workplace and reproductive health. Tune in to see what the gender activists are doing to make our communities a better place! Taking care of each other is crucial to get trough these challenging times. Support to marginalised communities and raising awareness about topics of this importance is the way to make sure everyone stays safe.