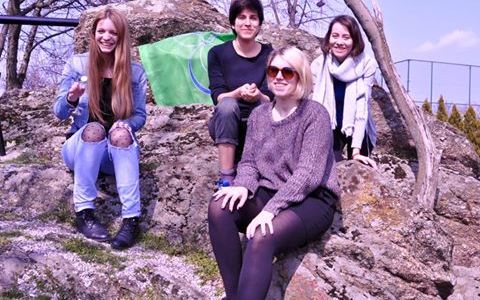 Last weekend (18-20th March), Serbian Green Youth held their 12th annual General Assembly in Vršac. During the GA, SGY adopted reports from previous year and discussed and voted on amendments of existing documents. At the GA, SGY adopted Action plan, which includes objectives of organization for the next 12 months with the activity plan. Also, the discussion about strategic planning was held, and the proposal to organize bigger strategy planning during the summer was adopted.

According to the adopted Action plan, our general aim is implementation of the Green ideology. In line with the general aim, we will work on:

Action plan is going to be implemented by newly elected, all female, Main Board which consists of Vanja Zarić, Natalija Gojak, Olja Stevanović and Nikoleta Petković. During their mandate, Main Board is going to be supported by member of Secretariat, Predrag Momčilović. As feminist organization, SGY strongly believe in empowerment of women to take leading political roles in patriarchal societies such as Serbian. This is especially important now, when austerity measures and bad economical situation effect everyone at daily level and women and other vulnerable groups are even more effected.

During the GA, gender working group was confirmed and new working group for Green political theory was formed. This newly formed working group will be mainly focused on theoretical research and on writing of new articles and documents for SGY and Okvir.

In the second part of the GA, members of SGY held sessions about internal and external ways of communication, visual identity, national and international networks, Green idea and new political tendencies.