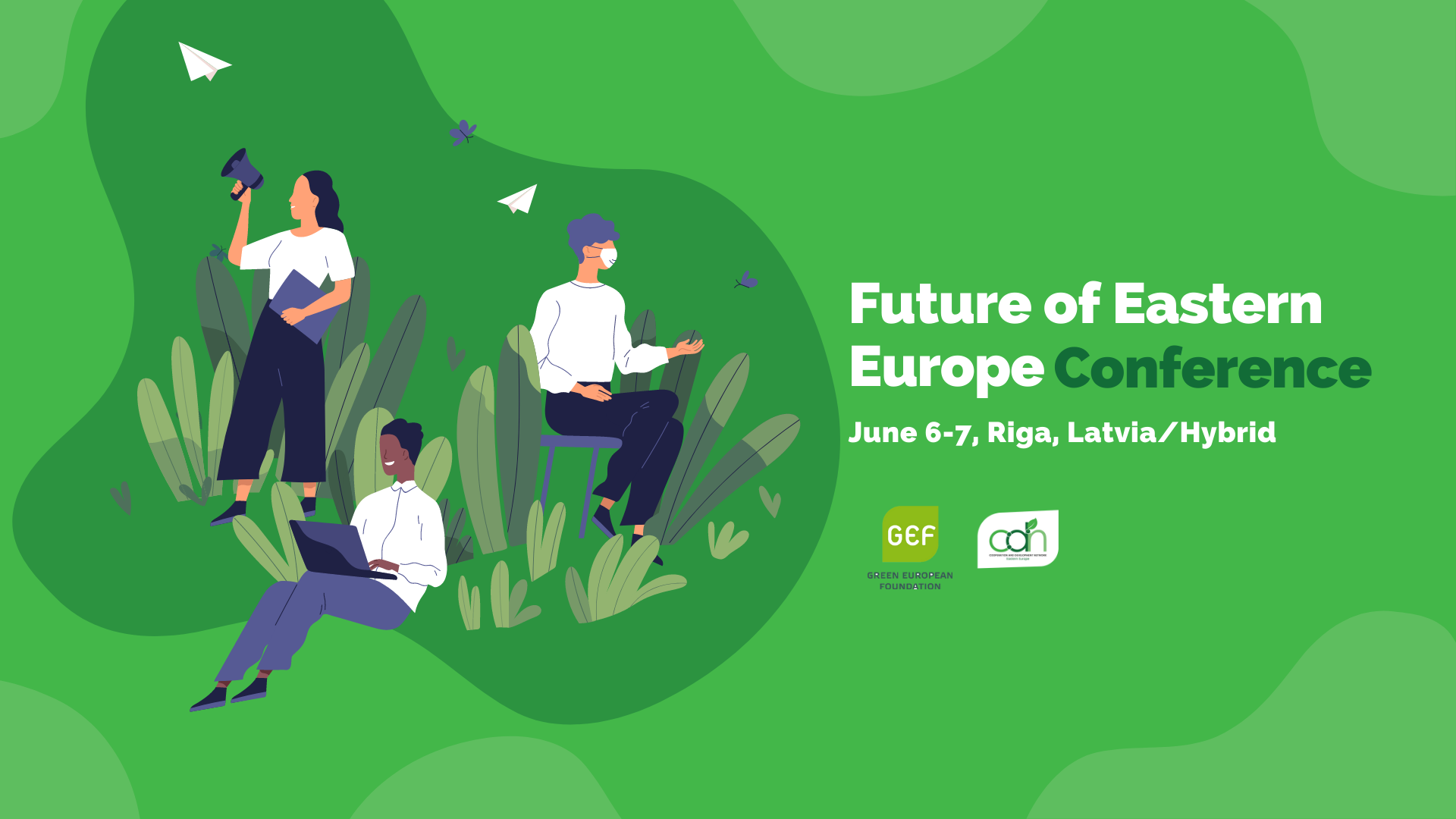 30 years ago a major shift has happened in global politics and Eastern Europe – states dissolved and collapsed and new ones have been established, the system has been changed. During this period there was a promise that after a long struggle we would achieve democracy and well-being.

But as we look back from today it is clear that this has not happened and if it did it was not sustainable.

These last decades have been full of hope and misery, protests and revolutions, conflicts and wars, economic uphills and downfalls, democratisation and backsliding.

This story has not ended, it is developing and continuing, there are more challenges and opportunities ahead. And all of us, Young Greens and activists in Eastern Europe, are part of this.

Therefore we in CDN decided to organise a conference where we would discuss all these issues we are facing.

How did we end up where we are now? What is the role of global powers such as the EU, Russia and China in our region? Should we be hopeful for the future as we see emerging environmental movements and progressive political actors? Can we achieve climate prosperity and what challenges do we have regards energy and transition?

These will be questions that we will ask during the conference and try to find answers to through panel discussions with invited speakers, informal talks and sharing our perspectives.
With this conference, we are aiming to provide a space for Young Greens from EE to discuss what is the common vision for building an authentic Green movement in EE and what is our role in it. We want to explore existing good potentials a have the space to meet with other progressive political actors from the region.
The Conference is a part of the transnational project “Future of Eastern Europe and (Eco)democracy” that we are organising in cooperation with the Green European Foundation, Green Institute of Greece, Sustainable Development Forum Green Window, Green Green Thought Association and Ecopilis Foundation.

Although the Conference was planned to happen prior to the CDN General Assembly in March 2022, taking everything into consideration minding everyone’s concerns and safety, the Executive Committee (EC) has accessed the ongoing situation and has come to a conclusion in agreement with GEF partners for the Conference to be postponed.

Having this in mind, The Future of Eastern Europe Conference will be taking place in Riga, Latvia on 6-7th June 2022.

Language: The main language of this activity will be English. But not being comfortable with interacting in English should not prevent you from applying. CDN strives to create an inclusive atmosphere at the events, where participants are encouraged to express themselves and ask for clarifications or translations from peers that speak the same language.

Costs: Anyone is welcome to take part in the conference with their own expenses. There is no participation fee.

In addition, CDN can cover the participation of a limited number of applications of young greens and activists from Eastern Europe (with a maximum age of 30). Meaning the cost of travel, and lodging (accommodation in multi-bed rooms, vegetarian/vegan food and refreshments).

In any case, take into consideration choosing the most economic and environmentally friendly means of travel (lowest price + travel time + CO2 emissions) and in case the trip would take less than 15 hours only travelling by land (train+bus) is reimbursed (IRPs §9.1).

Deadline: 20th of May (if applying for CDN to cover your participation.)

You will be informed by e-mail approximately 1 week after the deadline. Please add office@cdnee.org to your contacts, so that you do not receive our reply in the spam folder.

In case of having any questions, do not hesitate to write us at office@cdnee.org

Description: For more than thirty years Eastern Europe is a region of independent nation-states. During this period there was the promise that after a long struggle democracy and well-being would be achieved. Looking at it today, it is clear that most Eastern European countries are far from democracy and the well-being of citizens.
In this session, we will try to analyse and reflect on the last decades of Eastern Europe, mainly focusing to find the roots of current problems and possible solutions by looking back at the recent history – what shaped the region, how the democratisation and transition took place.
12:00-13:30 Influence of Global Powers: Eastern Europe at the crossroads between democracy and autocracy (Live Stream)
Speakers:

Description: Discussing political dynamics and transformation of Eastern Europe cannot take place without paying attention to global powers and their involvement in the region.
With this session we aim to map global powers: EU – China, Russia and US – and their interests; What role do they play in supporting democracy and progressive agenda or the opposite – encouraging and financing anti-democratic, right-wing and authoritarian forces.
15:30-17:00 War in Ukraine: Context, Present and the Effect on the region (Live Stream)
Description: Russian aggression against Ukraine is continuing. Every day we are witnessing atrocities, war crimes and violations of international law from the Russian side, at the same time Ukraine is bravely defending its people, sovereignty, democracy and even Europe as a whole.
In this session, we will take a look at a few different aspects of the conflict: the context of the war, the historical roots of Russian aggression, the current events, as well as what greens should do to help Ukraine, and how the ongoing war affects countries in the region.
17:30-19:00 Energy – a veto point and/or a chance for democracy? (Live Stream)
Speakers:

Sandy-Kyriaki Fameliari, ElectaEnergy Cooperative
Description: The energy we choose reflects the systems we support. In this session, we will discuss energy as the core factor for sustaining authoritarian regimes and the way the energy sector influences political dynamics. As well as we are going to focus on the possibility of democratisation through energy – decentralisation, renewables and the prospect of energy cooperatives in Eastern Europe.

10:00-11:30 Eco-Democracy as a new paradigm for Eastern Europe
Facilitators:
– Annie Maniadi and Dimitris Papageorgiou, Green Institute of Greece
Description: The Workshop aims to add a philosophical, ethical and institutional dimension to the conversations on the Future of Eastern Europe happening at the Conference. It hopes to bring together the different voices and ideas from the wealth of participants and facilitate a meaningful discussion on how to put Ecology at the Centre of Democracy.

How can we make democracy more ecological? What kind of changes do we need to apply to our thinking about participation, institutions and decision-making to put ecology and the environment at the forefront of our political systems?

These are some of the questions that we’ll be asking and trying to answer at our Ecodemocracy Workshop!
12:00-13:30  Conflicts in Eastern Europe: the theory and beyond
Description: The session aims to provide participants with the basis of conflict theory and conflict resolution and analyze the conflicts in EE through case studies.  The session encompasses theoretical and practical parts that will be conducted through non-formal education methods. The objectives of the session are 1)to understand the concept of conflict (origin, causes, consequences), 2) to discuss the mechanisms of handling conflict, particularly, conflict resolution, and 3) to explore the conflicts that happened in EE in recent years, their consequences and current state.
15:30-17:00 Open Mic
17:30-19:30 Movements into politics: Green Wave in Eastern Europe (Live Stream)
Speakers:

Description: For the last decades, if you checked the electoral map of Europe intending to see how Green parties have been performing, you would see a clear pattern: Greens in the west and north do well – they get elected in national and regional parliaments, city councils, win mayorships and even participate in governing coalitions; while in the east – you would see a grey colour representing either absence of Green parties from the political landscape or lack of support and therefore relevance. However, in recent years the pattern is dissolving and becoming a blur, the Green wave spreading to the East.

During the panel, we will discuss the ongoing Green wave with newly established Green political parties across Eastern Europe with the aim to analyse current success, find the patterns and similarities, understand the importance of grassroots movements and civil society, map challenges, envision the future and their influence on the political landscape.