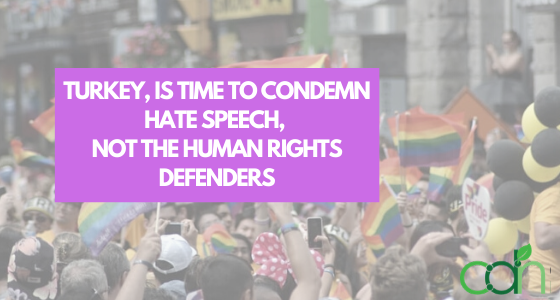 We are witnessing with great worry the aggravating situation on LGBTI+ rights and attack on defenders of these rights in Turkey. Since the pandemic outbreak, homophobia and transphobia are steadily rising as many authorities in the country consider the LGBTI+ community as carriers of the virus.

This culminated with the Friday sermon last month, when Ali Erbaş (Head ofTurkish Directorate of Religious Affairs) used hate speech against LGBTI+ community in Turkey. Below you can find the timeline since the sermon’s declaration and how it spurred attacks against the LGBTI+ community and human rights defenders.

In an April 24 sermon followed by thousands online, Ali Erbaş said in a statement using hate speech: “Islam condemns adultery and homosexuality because they bring disease and corrupt generations. Hundreds of thousands of people every year are exposed to HIV due to homosexuality and adultery”.

The Ankara Human Rights Association declared that it would file a judicial complaint against Erbaş for inciting hatred. The Izmir Bar Association said it was concerned the statement could encourage new hate crimes.

Therefore on April 27, the Ankara Bar Association filed a complaint against Erbaş with the Ankara chief prosecutor’s office on the grounds that Erbaş’s sermon constituted public provocation to hatred (art. 216/2 of the Turkish Penal Code).

Backlash against the defenders of LGBT+ rights and lawyers

In response the to probes, the Ankara Chief Public Prosecutor’s Office opened an investigation into the Bar Association on the grounds of “insulting the religious values adopted by a part of the public”

On April 27th, the president himself endorsed the hate speech in the following statement: “An attack on Erbaş is an attack on the state,”. Afterwards, the remarks were endorsed by some of Turkey’s top government representatives.

The websites of both Ankara and Diyarbakır Bar Association have been inaccessible since April 28. The legal prosecution of them is still under process.

Just a couple of days later, government announced the legislative regulation that restricts the freedom of speech of law societies.

A proof of the hate speech incitement of Erbaş is the hashtag #YallahHollandaya trending recently on Twitter in Turkey. The hashtag translates to “Go to Holland”, a popular anti-LGBTQ+ slur in Turkey, because of the Netherlands linked to homosexuality, according to groups attacking LGBTI+ community in Turkey.

Turkey’s government should guarantee protection from discrimination and hate crimes for all its citizens . It should not be human rights defenders who are criminalised for speaking out against homophobic statements said by state officials, but to condemn the hate speech itself!

Therefore, criminal investigations against the Ankara and Diyarbakır Bar Associations, should be dropped immediately.